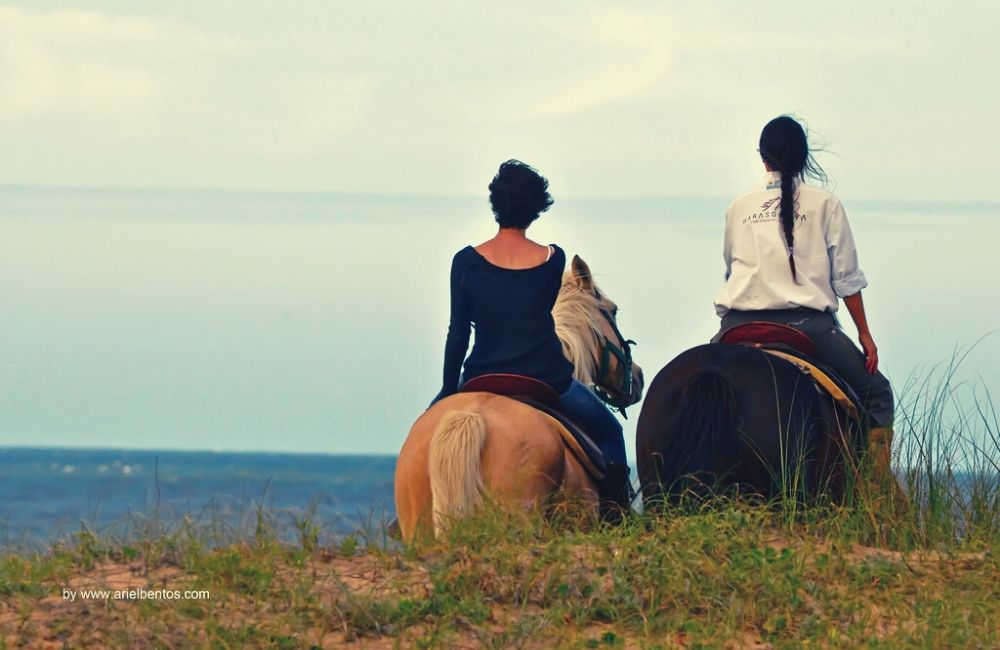 These establishments called haras, specialized in the breeding of Arabian and thoroughbred horses, have turned to related activities seeking greater economic profitability, such as becoming training centers or tourist spaces that many foreigners receive, especially Europeans who come to spend the summer in spas. close.

According to the Uruguayan Stud Book (created to register and authenticate the origins of racehorse breeds), there are 15 of the 250 thoroughbred studs in Maldonado in the entire country. Around 1.600 horses of this breed are born there per year. As for Arabian horses, according to the Uruguayan Society of Arabian Horse Breeders, there are around 400 births per year. To get an idea, raising a single thoroughbred foal and keeping it up to a year and a half can cost no less than $ 5.000.

Carolin Mallmann always liked the countryside and the sea. He was born in Austria, lived and studied in Uruguay, continued training abroad and then returned to settle in José Ignacio. There, on kilometer 183.5 of Route 10, he founded Haras Godiva, an establishment that began as haras, but which today works as an equestrian club, certified as such in 2018 by the Uruguayan Federation of Equestrian Sports.

Mallmann found that 10-hectare piece of land and imagined it as his future home. “He fell in love with the place. At that time there was nothing, it was her and a couple of other houses, but she saw potential ”, says the administrator of the farm, Paulina Morales.

Mallmann started his business with an Arabian horse that today is 16 years old and still lives there. With the passage of time, animal husbandry ceased to be the center of activities of the haras and in 2005 they incorporated guided horseback riding along the beach, for member riders and tourists, and began with the training of dressage sports horses. "Carolin had never done training," says Morales. That is why she began with classes, very little by little, until she became a prominent competitor in the discipline.

At Haras Godiva, the staff has to be a horse lover. “If they don't like them, they can't stand it. It is a full time task. You have hours, of course, but if the horse is sick, you have to be there, and if you like it, it is much easier ”, explains the administrator.

The equines of this discipline begin to be tamed at three and a half or four years; They ride six days a week and have a day off. There are those who sleep inside (in the pits) and during the day are kept on individual electric pickets with drinking fountains, and those who live outside all year round. All have a health plan controlled by a veterinarian, and are fed ration, pasture and alfalfa.

Today they have 27 horses, 12 for horseback riding and 15 for training. There are Uruguayans and Brazilians, Lusitanians, Hanoverians and mestizos. Outstanding specimens came from there such as Desordeiro Interagro, winner of the preliminary category of the 2019 National Dressage and Paratraining Championship, and Hamilcar Interagro, winner of the medium category of the same championship.

There also works a boarding school and sale of already trained equines. “The members call us, we prepare their horse for them and they go for a walk to the beach alone,” he says. They currently have a mare and a male that they are teaching and preparing to sell in figures that can start at $ 30.000.

Today, and after 10 years of living there, the Austrian with Uruguayan nationality changed her place of residence: she married an Argentine and moved to their country. However, every vacation and at least once a month, Carolin revisits her horses in José Ignacio.